So you read my post on my microbiome or on human health in general, and you are wondering: what exactly does moose eat on a daily basis anyway? Remember, I am interested in eating to fuel myself for adventures, and to allow my genes to bring out the best of their potential (different genes can be expressed as a result of environmental conditions, and I am trying to optimize those). But, I am also interested in eating for pleasure, because that is an important part of life, too!

As opposed to the major schools of thought, I tend to believe that one of the major problems with America's health today is actually not eating enough! No, that doesn't mean that we need to get more calories. It means that we eat a lot of very nutrient-poor foods - essentially empty calories. As a result, many Americans have an overabundance of calories, yet still have a deficiency in nutrients like Vitamin D, Vitamin A, Vitamin K, Vitamin C, magnesium, potassium, and the list goes on. Our bodies, without these micronutrients, will not function optimally, and they will also ask for more food until they get these nutrients! The result? I find that without a diet high in nutrients, your body will ask for more food and you will overeat on calories while still not fulfilling your micronutrient requirements.
The answer in my mind is simple - eat extremely nutrient-dense foods! Some foods that I like to include on a near-daily basis in LARGE quantities are leeks, broccoli, kale, spinach, ginger, cilantro, red garnet yams, squash, avocados, spicy peppers, pastured eggs (raw yolks), pastured butter, pasture beef, and salmon. Below is a Microsoft Excel download with every food I ate from January 8th until January 16th. The file is all raw data (no analysis), but you can see that I try to include these foods often and in large quantities. Below this is an easier-to-read chart of my 'nutritional goals' (calculated by CRON-O-Meter) showing whether or not I fulfilled them. Keep in mind that these goals are calculated by the program for a person of my statistics (size, age, etc.) on the 'Zone Diet' in calorie restriction mode (5%). This means that the macronutrient ratios (fat, carbs, and protein) are fairly meaningless given that right now, I follow more of a paleo-esk formula (Perfect Health Diet levels of macronutrients) for those ratios (though I plan to further test a Zone Diet ratio in the future). 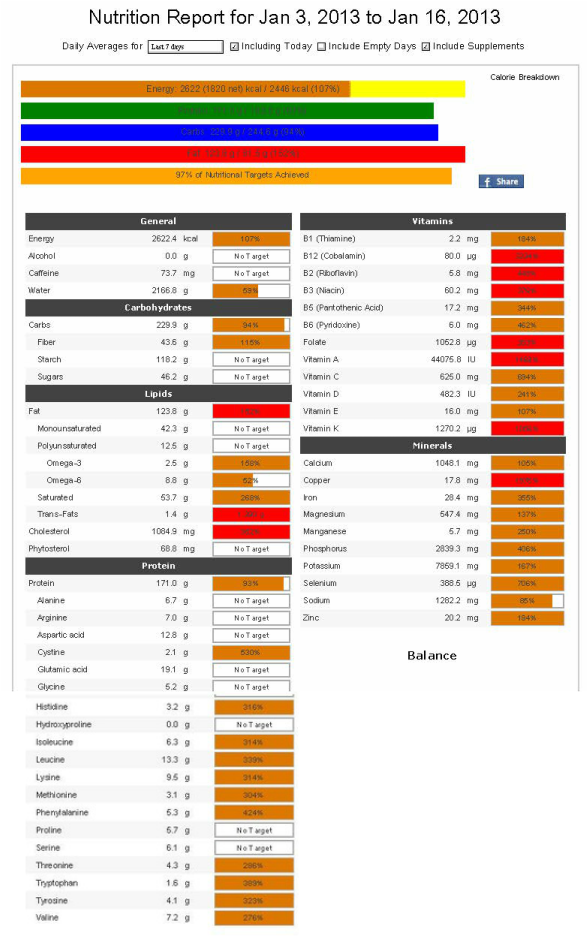 As you can see, the ONLY micronutrient I did not hit the recommended amount for was sodium. Again, given that sodium recommendations are based not in ancestral health as they probably should be, but in our population's consumption of sodium, I am probably ok. Also, I drink a glass of water with about a teaspoon of Himalayan pink salt most mornings anyway to support the adrenals (stay tuned for more posts on this), so I am probably getting more than enough anyway.
In terms of fats, the only 'goal' that I missed was getting enough omega-6 fatty acids! Ha! That is ok with me, as omega-6 fatty acids are highly inflammatory and I try in general to avoid them as much as humanly possible. I would prefer as low of an omega-6:omega-3 ratio as I can get.


Do this for your diet for a few days - are you eating a micronutrient-rich diet!? Compare it to your macronutrients as well, as I do below!

Based on my numbers (note that I filled all of my micronutrient requirements while getting an overall deficit in calories when excercise was included), I would say I have a fairly micronutrient rich diet now. This was not always so, and of course I had to make small and meaningful changes in my habits to get there.

Though I find macronutrients (fat, carbohydrates, and protein) less interesting, I am still interested in experimenting with them. I have done low carb, high carb, ketogenic, and high protein diets before. Now, I like to vary my macronutrients widely.

This means that I like to have days where I eat a TON of carbs and no protein (all carbs from vegetables or fruit like coconut, preferably; example: January 11th), days where I eat almost no carbs and go into a ketogenic state for most of the day (January 16th), and days that are either high or low calorie (January 13th vs. 15th). This approach makes sense to me: our ancestors had highly variable access to food sources. A hunt might not be successful and result in a diet with no animal products (the only vegetables and no animal products day like Jan. 11th), or a hunt may go well and a feast on only animal products and some vegetables might have resulted. Calories, similarly, were variable. As a result, I like to switch things up, but it will of course depend also on my activity levels that day and my energy requirements. Changing things up too often can be tiring as well, so I listen to my body.

On Intermittent Fasting and Seasonal Eating

Exciting stuff, I know. It's coming soon... Sign up below to receive updates when it comes out!
Sign up for our free newsletter!

On 'Cheat' Meals and Trying Out Binge Days

You guessed it, coming soon as well...